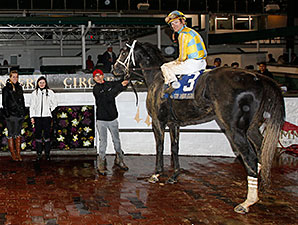 After sending out at least 17 horses for works Sunday, the Mark Casse stable had another busy day Monday, Jan. 25, with champion Tepin and 3-year-old Airoforce on the work tab at Palm Meadows Training Center.

Tepin, honored with an Eclipse Award as champion turf female of 2015, breezed five furlongs in 1:01.65, which ranked ninth of 39 works at that distance over the main track. Jockey Julien Leparoux was aboard.

Leparoux also worked the Kentucky Jockey Club Stakes (gr. II) winner Airoforce, who was timed in :48 for four furlongs, third-fastest of 70 at that distance. Grade I winner Catch a Glimpse breezed five furlongs in 1:02.75.

Tepin and Airoforce are both scheduled to make their seasonal debuts Feb. 13 at Tampa Bay Downs. Tepin, a 5-year-old mare who defeated males in the Breeders’ Cup Mile (gr. IT), is scheduled to run in the Lambholm South Endeavour Stakes (gr. IIIT), for older fillies and maes going 1 1/16 miles on grass.

Airoforce runs in the Sam F. Davis Stakes (gr. III) the same day, and Casse said the colt will have a more intense breezed next week.

Casse said he decided to work Tepin, a grass specialist who is also a graded winner on dirt, on the main track due to the inordinate amount of rain in South Florida that has hampered grass works.

“She’s a good dirt horse, but she’s superior on grass. We got her galloping out six furlongs in 1:13 and change,” Casse said.

Catch a Glimpse, the Breeders’ Cup Juvenile Fillies Turf (gr. IT) winner last year, was initially scheduled to run in the Sweetest Chant (gr. IIIT) at a mile for 3-year-old fillies Jan. 30 at Gulfstream Park but she had a setback and is now being aimed at the Feb. 27 Herecomesthebride Stakes (gr. IIIT) at 1 1/16 miles over Gulfstream’s turf course.