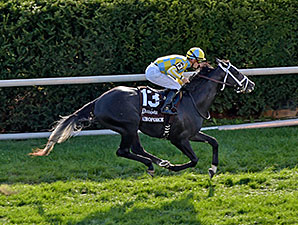 Ridden by Julien Leparoux for trainer Mark Casse, Airoforce, a Colonel John colt, sat just off the early pace set by longshot Argot, rallied three-wide off the final turn and held off the late run of Camelot Kitten, who was far back early, to win by 1 1/2 lengths. Siding Spring, another Casse trainee, finished another half-length back in third.

The Bourbon is a “Win And You’re In” event for the Breeders’ Cup Juvenile Turf (gr. IT), which also will be held at Keeneland this year. When Casse was asked if Airforce would enter, Casse said: “We’re in.”

Airforce, bred in Kentucky by Stewart Madison, is out of the Cuvee mare Chocolate Pop. After his win at Kentucky Downs Sept. 5, he worked well twice on the dirt at Churchill Downs before the Bourbon.

“I was a little nervous going into the first turn,” Casse said. “Actually both of our horses had pretty wide trips. Going in (the race) we thought (Airoforce) was a good horse, and I think he proved today he is.”

The Casse stable won four races in the first three days of the Keeneland fall meet.

“It was a good race,” Leparoux said. “Big step up from the maiden he won at Kentucky Downs. He’s still a little green. When I got to the lead down the straight, he started looking around a bit. He’s a nice horse. I think he should get better.”