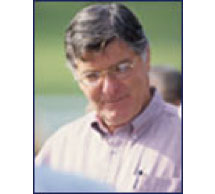 Born in Johnstown, PA, Dan made the jump from journalism to the bloodstock arena in 1972. He shaped his Thoroughbred career in Canada and California before establishing his own farm in Kentucky in 1993. He advised clients through his company, Dan Kenny Bloodstock. Outside of the auction scene, broodmares and matings were Dan’s forte, and he was most proud of having purchased future Broodmare of the Year In Neon for longtime client John Franks. Other mares Dan selected prior to their stakes-producing success included the dams of Champion and Breeders’ Cup winner Chilukki, Champion Phantom Light, Grade 2 winner Comeonmom, Grade 2 winner Mula Gula, and Grade 3 winner Sunny Blossom. In addition to his bloodstock successes, Dan was an avid handicapper, former auction announcer, appraiser, and had 23 years experience as a television commentator with NBC, ESPN and CBC.

Dan Kenny sadly passed away in December of 2018. We miss him dearly, and we enjoy all the memories we shared with him during his time at Four Star Sales.