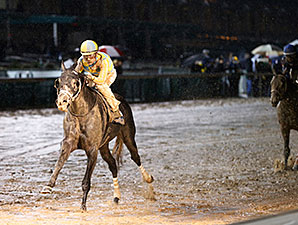 John Oxley’s Airoforce splashed over the sloppy, sealed track at Churchill Downs Nov. 28 with nary an issue, closing gamely to grind out 1 3/4-length victory when making his dirt debut in the $200,000 Kentucky Jockey Club Stakes (gr. II). Watch Video

The 2-year-old Colonel John colt was second last out in the Oct. 30 Breeders’ Cup Juvenile Turf (gr. IT), and one start prior won the Oct. 4 Dixiana Bourbon Stakes (gr. IIIT) at Keeneland for trainer Mark Casse off a solid first-out maiden win over the Kentucky Downs course Sept. 5. With regular rider Julien Leparoux in the irons for the 1 1/16-mile Kentucky Jockey Club, he rated kindly in eighth before making up ground around the turn and wheeling out for the stretch drive.

“He broke not as sharp as I was expecting, but after that he relaxed beautifuly behind those horses and took the dirt fine,” said Leparoux, who swept the two graded stakes on the card after guiding Carina Mia to victory in the Golden Rod Stakes (gr. II) for 2-year-old fillies. “We love this horse; he always worked good on the dirt. First race on the dirt you never know how they’re going to like it, but he’s a nice horse.”

Derby Express jumped out to do the early running as the field of 13 was sent on their way, with 2-1 favorite Mor Spirit tracking closely to his outside. After opening fractions of :23.50 and :47.61, Mor Spirit drew on even terms with the leader through three-quarters in 1:13 flat. But Airoforce was looming after making up ground on the inside, and when set down for the drive he responded with a determined late run. Final time was 1:45.48 after a 1:38.56 mile; all runners carried equal weights of 122 pounds.

Airoforce paid $9, $4.20, and $3.20 at odds of 7-2, while Mor Spirit brought $3.40 and $3.40. Closing up the rail to check in third was 16-1 shot Mo Tom ($7.80) while Gun Runner wound up fourth after momentarily engaging Mor Spirit for the lead in early stretch. Annual Report, My Majestic Flight, Perfect Saint, Tom’s Ready, Rated R Superstar, Nana Looch, Derby Express, Force It, and Uncle Jerry completed the order of finish. Discreetness scratched.

“Today was an exciting day; this is the future, this is what we’re looking forward to,” said assistant trainer Norm Casse, who one race prior saddled juvenile Conquest Big E to a two-length mile allowance victory. “Airoforce and Conquest Big E have always been 1-2 in our barn, and they’re providing some anticipation for the spring.

“I thought Julien rode him perfect, I think the blinkers on made a big difference today. When Julien asked him to go, he was always there for him when he needed him. We’re excited for what’s next.”

As to what’s next, Casse added, “I’m sure that on Tuesday when we ship out of here, we’ll ship them down to Palm Meadows and they’ll get a little bit of a break, and we’ll pick out spots for them in early Feburary.”