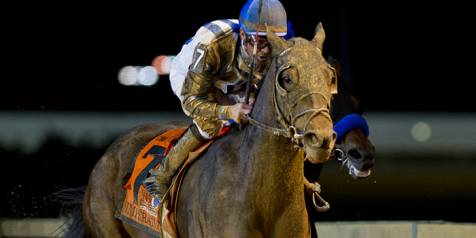 Four Star Sales will be represented by Imperative in the Classic, Souper Colossal in the Juvenile, and Conquest Harlanate in the Juvenile Fillies Turf

A 4-year-old son of Bernardini, Imperative had an undistinguished career prior to 2014. In his first ten starts he had two wins and two second-place finishes, including one in a $50,000 claiming race as recently as December 2013.

The gelding began 2014 with a pair of allowance optional claiming efforts before trying a graded stakes. He finished second in the 2014 San Antonio (Grade 2), crossing the wire ahead of Game On Dude and four others. He then ran seventh in the Grade 1 Santa Anita Handicap before winning the Grade 2 Charles Town Classic at odds of 26-1. His winner’s share of $1,000,000 brought his career earnings to over $1.1 million and nearly doubled his trainer’s career earnings.

Imperative is a son of leading sire Bernardini out of the stakes-winning Caller I.D. mare Call Her, making him a half-brother to graded stakes winner Battle Won as well as stakes winners Matched and Nadeshiko.

Super Colossal
Winner of all 3 starts