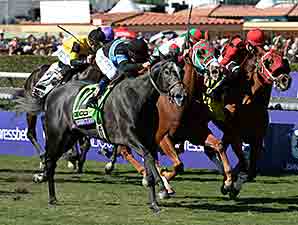 When the World Championships are renewed for a third straight year Oct. 31-Nov. 1 at Santa Anita Park, missing from the lineup will be one of the most dynamic Breeders’ Cup winners of the past two years—two-time Turf Sprint (gr. IT) winner Mizdirection.

The Kentucky-bred daughter of Mizzen Mast was carefully managed by Mike Puype for a partnership consisting of Bill Strauss, Danny Gohs, B. Beljak, KMN Racing, and sports media personality Jim Rome’s Jungle Racing. Mizdirection won the grass sprint in scintillating come-from-behind fashion in 2012 and 2013, each time returning to the winner’s circle following a five-month layoff.

Puype said he misses having Mizdirection in his barn; not only will he not be able to saddle the 6-year-old mare to defend her title, but he will not have any starters in this year’s Breeders’ Cup.

“You miss it,” the trainer said. “She was a very serious horse who did some very serious things. She doesn’t owe anybody anything except a good retirement for herself. Yeah, it does hurt not to have a horse of her caliber or any horse going into the Breeders’ Cup. But you can’t dwell on it. In life, you have to turn the page, you have to move on and just try to get another good horse.”

Ridden by Hall of Famer Mike Smith to both of her Breeders’ Cup victories, Mizdirection was off a step slow in the 2012 Turf Sprint as the pacesetters set sizzling fractions of :21.11 and :42.39 for the first half-mile. Patiently ridden, she was swung to the middle of the course as the field crossed the dirt track coming off the hill and onto the main turf, setting her sights on leaders Unbridled’s Note and Reneesgotzip.

Under vigorous encouragement from her rider, Mizdirection ran down Unbridled’s Note to win by a half length in final time of 1:11.39 for the distance of about 6 1/2 furlongs.