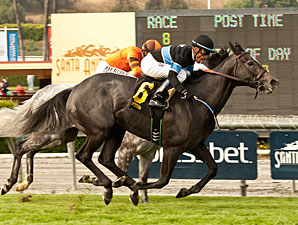 Mizdirection, racing for sports radio personality Jim Rome’s Junge Racing and partners, earned her fourth straight victory overall as the 2-5 choice. The 5-year-old mare by Mizzen Mast  , could be headed for New York and the $500,000 Just A Game Stakes (gr. IIT) at one mile June 9 at Belmont Park, Puype said afterward.

“Right when you think she’s beat, she finds another gear, she digs deep, and finds a way to get it done,” said Rome. “She’s so tough. She does not want to lose.”

Bred in Kentucky by Joseph J. Perotta out of the Clever Trick mare Deceptive, Mizdirection is now 6-for-6 in her career on the Santa Anita sod. She won last year’s Las Cienegas by half a length as the 3-10 favorite.

This year’s Las Cienegas was a two-horse race most of the way. Schiaparelli, a lightly raced 5-year-old Ghostzapper   mare out of the former hillside turf star Cambiocorsa (by Avenue of Flags), took the early lead from Purim’s Dancer, who broke from the rail in the field of five older fillies and mares.

Flores said he was comfortable allowing Schiaparelli to glide along in front.

“There was no other pressure from anyone else so I just kind of waited to see how far he (Talamo) was going to go,” he said. “She’s unbelievable. She knew exactly when she was going to do the job.

“After we crossed the dirt, I got after her a bit and I let her know it was time to get there, but the last sixteenth I knew it was over. She is very smart, she knows what she’s doing.”

Mizdirection, coming off a 2 1/4-length triumph in the one-mile Buena Vista Stakes (gr. IIT) Feb. 18, was cutting back in distance for Puype. the ultra-consistent mare won for the 10th time in 15 starts. She has been worse than second just once in her career.

“She broke real sharp and she ran perfect,” Puype said of the winner. “She did everything she needed to do today and the other filly (Schiaparelli) ran lights out. What are you going to say when they run that good together?

“I felt at a point in the stretch that she (Mizdirection) wasn’t going to get there,” Puype added. “The other filly was running and she made it hard on her and she barely got there as it was. She always shows up. She’s a very live horse.”