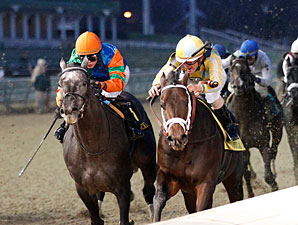 Uncaptured, a contender on the Triple Crown Trail until his 10th-place finish in the Toyota Blue Grass Stakes (gr. I), was honored April 19 as Canada’s 2012 Horse of the Year during the Sovereign Awards ceremony at Woodbine Race Track in Toronto. The Sovereign Awards, honoring achievements in Canadian racing, are presented by The Jockey Club of Canada.

A 2010 son of Lion Heart who won six of his seven outings, including the 2012 Kentucky Jockey Club Stakes (gr. II) for trainer Mark Casse and owner John C. Oxley, Uncaptured outpolled Hunters Bay and Strait of Dover for Horse of the Year honors. Uncaptured also was honored as top 2-year-old male, while Casse and Oxley took the awards in their respective categories.

For the second straight year, Luis Contreras was named Canada’s top jockey. Contreras was Woodbine’s top rider in 2012 with 195 victories and nearly $9.3 million in earnings.

Uncaptured, Horse of the Year/2-Year-Old Male

Spring in the Air, 2-Year-Old Filly