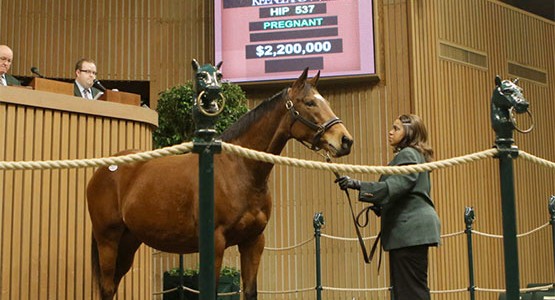 Keeneland’s January horses of all ages sale ended Jan. 15 with declines after a four-day auction in Lexington that posted declines in a year in which it did not feature a major dispersal.

This year’s top price of $2.2 million did outperform last year’s sale-topping $775,000 bid, but in overall numbers the 2015 sale saw dips in gross, average, and median.

Buyers and sellers both commented that the 2015 January catalog had fewer standouts than in some previous years, partly due, they believe, to sellers’ willingness to hang on to their most commercial bloodstock in a market in which quality is in strong demand and upgrading and replacing stock, consequently, is proving expensive. Demand for lots perceived to be the best quality on any given day continued to be strong, with notably aggressive trade for short yearlings, in particular.

The broodmare Up, sold at the Jan. 13 session, topped the sale when RanJan Stable principals Bob Naify and Jan Vandebos, bidding through agent Frank Taylor, paid $2.2 million for her. She was the only Galileo mare to go through the ring at this sale, and she also was the only mare offered in foal to Claiborne Farm stallion War Front .

Six-year-old Up was followed through the ring by her 2014 War Front filly, who brought the auction’s highest yearling price of $800,000 on a bid from LNJ Foxwoods, the racing and breeding operation owned by Larry, Nanci, and Jaime Roth. The family intends to race the filly and eventually retire her to the broodmare band they are developing.

Four Star Sales consigned Up and her War Front filly.

“People are here to buy those jewels,” Russell said. “Looking back at September and November, and now in January as the sale season is coming to an end, we have stability in this market. It is a discerning market, there’s no mistake. People are looking for quality. It makes no difference what level you’re in, they want the best of that level. And, at the present time, if you don’t tick all the boxes, there’s not much market there.”

Taylor Made Sales led all consignors by gross sales at the 2015 January auction. Eighty-five of their consignment’s horses grossed $4,639,100 over the four days. By average price (three or more sold), the leaders were Lisa and Tim Turney with three horses averaging $156,667.

Union Rags , whose first crop of foals are yearlings in 2015, was the leading sire by average (three or more sold) with four yearlings averaging $118,750.

Thursday’s highest price was the $120,000 that Milfer Farm Inc. spent for a yearling Malibu Moon colt out of the Medaglia d’Oro winner Medal Winner. The March 25, 2014 colt is the second foal for his dam, who is a half sister to graded winner Skip to the Stone and to stakes winner My Heavenly Sign.

Coronation Investments paid Thursday’s only other six-figure price, $105,000, for the Mill Ridge agency’s Awesome Again mare Trophy Gal. The unraced 6-year-old is out of grade III-placed stakes winner Devotion Unbridled, by Unbridled, and is a half sister to two-time grade III winner Unbridled Humor, by Distorted Humor. She was offered in foal to The Factor , whose first foals are yearlings this year.