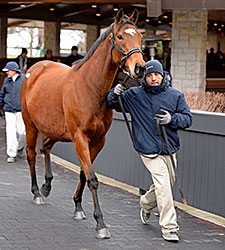 Reprinted from the Bloodhorse

The Irish-bred broodmare Up gave a big lift to Keeneland’s January horses of all ages sale Jan. 13, selling for a sale-leading $2.2 million at the auction’s second session on a day that saw average price rise as median dropped.

Consigned by Four Star Sales agency, Up was the only Galileo mare, and the only mare in foal to Claiborne Farm’s popular sire War Front , to go through the auction ring at the January sale. After an intense bidding war involving multiple parties, the winning bidders were Bob Naify and Jan Vandebos of RanJan Stable, who secured the purchase on a single bid through their agent, Frank Taylor.

The purchase also made RanJan Tuesday’s leading buyer by gross. Galileo also led all sires Jan. 13 by gross, and War Front was tops among covering sires on the strength of Up’s sale.

“We just love the pedigree, love War Front, love Galileo,” Taylor said of the 6-year-old mare. “The family’s active, there’s a good stallion in the pedigree, and so it was something we wanted. They’ve been wanting a Galileo mare for a long time, and she was the one.”

The stallion Taylor mentioned is Dutch Art, Up’s Medicean group I-winning half brother, now at stud at England’s Cheveley Park Stud. Up is a dual group winner and has her own group I credit, having finished second in the 2012 French One Thousand Guineas. She is out of the Spectrum mare Halland Park Lass.

And she was a relative bargain.

“That’s about where we pegged her,” Taylor said of the price. “We looked at some comparables, and some of those mares by Galileo and in foal to War Front were bringing a lot of money, like $3.9 million and $3.6 million and $3 million, so we thought that was a fair price.”

Taylor said Naify and Vandebos had not yet decided whether to keep or sell Up’s 2015 foal. The pair keep about a half-dozen mares at Taylor Made Farm near Nicholasville, Ky., including Cambiocorsa, the dam of grade II winners Moulin de Mougin and Schiaparelli.

Bloodstock agents Jason Litt and Alex Solis were among the unsuccessful bidders for Up, but they came back to buy the mare’s yearling $800,000 War Front filly, who sold immediately after her dam and had the session’s highest yearling price and second-highest price overall.

Agency representative Katey Caddel said that they were bidding on behalf of Larry, Nanci, and Jaime Roth’s LNJ Foxwoods. That operation is building a broodmare band; their mare purchases in recent years included $750,000 Life Happened, in foal to Harlan’s Holiday, at last year’s Keeneland January sale.

Caddel said the Roths were not the clients Solis and Litt had represented in bidding for Up but noted that her March 13 filly would eventually join the family’s broodmare band after racing for them.

“A really good physical, a good cross between a War Front and a Galileo,” Caddel said of the filly. “Good length to her, a really smooth mover. So she ticked all the boxes for us.”

Four Star Sales also consigned Up’s yearling filly and ended the day as the session’s leading consignor by gross and average (three or more sold) with a total of $3,620,000 for 22 horses, who averaged $164,545.

“Breeding stock sales vary from year to year, and what people are aiming for from year to year changes,” Keeneland sales director Geoffrey Russell said after the session. “It’s just a factor of the market, and we’d like it to be less.”

Up and her War Front yearling easily outpaced the Jan. 12 opening-day session-topper, the $400,000 mare Premier Steps, and they were among six horses who brought $300,000 or more during the second session.

“We were very pleased to have a mare of her quality in the sale, and her yearling, and we were delighted to be able to get everything done, with especially good action over the $2 million mark and three major players all trying to get in there all at the same time,” Russell said.

“The top yearlings, the quality yearlings, there was plenty of money for them today,” he said. “Most of them will probably come back here in September, so they have to go through a lot of hoops. There were some very nice short yearlings sold today, and they sold very, very well.”

Hidden Brook, as agent, picked up grade II winner Carolyn’s Cat, in foal to Blame , for $450,000. The 10-year-old Forestry mare is out of grade III winner People’s Princess, by Meadowlake, and was offered by Lisa and Tim Turney, agents; her sire, Forestry, led the day’s sires by average price (three or more sold). Carolyn’s Cat was one of four lots by Forestry to sell Tuesday, and they averaged $133,250.

Late in the session, the British Bloodstock Agency (Ireland) went to $350,000 for the Paramount agency’s 5-year-old Giant’s Causeway broodmare prospect Magical Steps, a stakes-placed runner who is a half sister to stakes-winner Mystic and a full sister to stakes-placed Magical Affair. And early in the day, the unraced Bernardini mare Pianosa, a three-quarters sister to grade I winner A. P. Adventure, brought $300,000 from the Warrendale Sales agency; Padraig Campion’s Blandford Stud was the consignor.

“This market is very, very solid at the top end, and, if you want quality, you’ve got to pay for it,” Adena general manager Eoin Ryan said. Adena Springs was the session’s top buyer by average purchase price (three or more bought) with a trio of horses averaging $233,333.

The Keeneland January sale continues through Jan. 15, at the Keeneland sale pavilion in Lexington. Sessions begin daily at 10 a.m