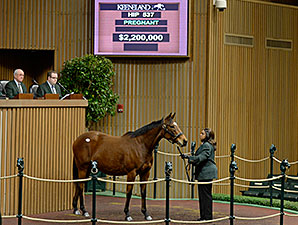 Up Brings $2.2 Million at Keeneland Sale

Aptly named Up, a multiple group stakes-winning and classic-placed daughter of top international sire Galileo in foal to War Front, lit up the bid board when she was sold for $2.2 million during the Jan. 13 second session of the Keeneland horses of all ages sale.

Frank Taylor of Taylor Made Sales Agency signed the ticket for the sale-topper on behalf of RanJan Racing, consisting of Robert Naify and Jan Vandebos.

The 6-year-old mare, the only one in the sale in foal to prominent sire War Front after the mare Twirl was withdrawn Jan. 12, was consigned by Four Star Sales as Hip 537.

“We just love the pedigree, love War Front; love Galileo,” Taylor said. “The family’s active, there’s a good stallion in the pedigree, and so it was something we wanted. They’ve been wanting a Galileo mare for a long time, and she was the one.”

“It was a great foal out of a grade II-winning mare,” said Katey Caddel, representing Solis/Litt in the purchase of the War Front filly. “She’s a half-sister to a really nice stallion over in Europe.”

Caddel said LNJ Foxwoods, which consists of Larry, Nanci, and Jaime Roth, plans to race the filly and hope she’ll be added to the broodmare band eventually.

The sale of Up was the highest at the January sale since 2008 when Southern Equine Stables went to $2.7 million to purchase the mare Irish Cherry.

Irish-bred Up was a group II winner who placed second in the group I Poule d’Essai des Pouliches (French One Thousand Guineas). Her half brother Dutch Art won the Shadwell Middle Park Stakes (Eng-I) and is a sire.

The sale of Up and her filly highlighted the first two days of the four-day sale in Lexington that lost some of its luster during the first session when champion Blind Luck went unsold on a final bid of $1.4 million, and the highly-regarded mare Foxy Danseur joined Twirl on the list of horses taken out of the sale late.