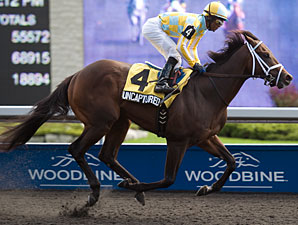 Reprinted from the The Bloodhorse

It’s not unusual for trainer Bob Baffert to spread his talented 3-year-olds across the country, but he’ll be trying something new with morning line favorite Power Broker in the $500,000 Indiana Derby (gr. II) Oct. 5.

That’s because the Indiana Derby, a race the Hall of Fame trainer landed in 2009 with Misremembered and again in 2010 with Lookin At Lucky , is being contested for the first time at the Indiana Downs slots facility in Shelbyville this year. It was previously held at Hoosier Park in Anderson.

“I’ve never run a horse at Indiana Downs before, so I don’t know what to expect,” said Baffert, who also has the favorite in the $200,000 Indiana Oaks (gr. II) a race earlier with Fiftyshadesofhay.

Baffert could break a tie with fellow Hall of Famer D. Wayne Lukas and Steve Asmussen for most wins in the Indiana Derby, inaugurated in 1995.

Power Broker, who drew post 5 in an overfilled field, is listed at 3-1. Gary and Mary West’s son of Pulpit will be facing a solid group of 11 sophomores, with three others entered as also-eligible. The Indiana Derby is the 11th of 12 races on a card that carries about $1.3 million in stakes purses. The 1 1/16-mile race is scheduled for a 6:45 p.m. EDT post.

Power Broker has not raced since July 28 when finishing a distant second to Verrazano in the $1 million Haskell Invitational (gr. I) at Monmouth Park. Winner of the 2012 FrontRunner Stakes (gr. I) before running fifth in the Grey Goose Breeders’ Cup Juvenile (gr. I), both at Santa Anita Park, he has won two of four starts this season. The Kentucky-bred chestnut colt will shoulder co-highweight of 124 pounds, including jockey Martin Garcia.

Among his opponents are reigning Canadian Horse of the Year Uncaptured, the 9-2 second choice who looks to be in good form for trainer Mark Casse. The Ontario-bred son of Lion Heart will also carry 124 pounds with Miguel Mena back aboard from post 8.

Winner of the second leg of the Canadian Triple Crown, the Prince of Wales Stakes at Fort Erie July 30, Uncaptured comes in off a third-place finish in the Smarty Jones Stakes (gr. III) Sept. 2 on a muddy Parx Racing strip. Stuck on the far outside, he bobbled on the first turn of the one mile, 70-yard test.

“He’s on his game and has been training really well,” said Casse while noting that John Oxley’s colt has consecutive bullet works at Churchill Downs. “We’re looking forward to the race.”

Todd Pletcher is sending Micromanage, third behind Power Broker in the Haskell, and Midnight Taboo from New York for the Indiana Derby. Both colts are owned by Mike Repole and will run coupled as an entry in the wagering. Midnight Taboo and Micromanage will have to overcome the two far outside posts as they drew No. 11 and No. 12, respectively. The entry is the early third choice in the wagering at 5-1.

Midnight Taboo scored an allowance/optional claiming win in his most recent try Aug. 17 at Saratoga Race Course. Micromanage has had one start since the Haskell, finishing fifth in the Smarty Jones.

Bill Mott, another Racing Hall of Fame member, entered Mr Palmer (10-1), making his first appearance since a fourth-place effort in the Wood Memorial (gr. I) April 6 at Aqueduct Racetrack. Another son of Pulpit, owned by Michael Lauffer and Gregory McDonald, he won the Private Terms Stakes at Laurel Park last March.

Edge of Reality won the Smarty Jones by a neck as a slight favorite for trainer Tony Dutrow and Stewart Grant’s The Elkstone Group. The son of Lawyer Ron has won four of seven starts and is pegged at 6-1 with Stewart Elliott in the irons.

A second California invader is Holy Lute, on a two-race win streak for trainer Jim Cassidy including a victory in the listed El Cajon Stakes Aug. 30 on the Polytrack at Del Mar.

Others that bear watching are Ruler of Love, runner-up in both the West Virginia Derby and Super Derby (both gr. II) in his most recent races for trainer Joan Scott, and Jim Tafel’s Fordubai, winner of the Straight Line on Polytrack at Arlington Park for trainer Greg Geier Aug. 17.