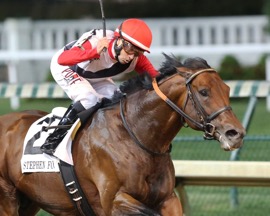 The hard-knocking 6-year-old Bradester (Lion Heart) broke through at the highest level with a game front-running triumph under the lights in Saturday night’s GI Stephen Foster H. at Churchill Downs, a Win and You’re In for the GI Breeders’ Cup Classic. Away to a characteristically sharp beginning, the 9-1 chance had things his own way through a half-mile in :47.58 and six furlongs in 1:11.69. Cornering for home with a daylight lead, the Joseph W. Sutton colorbearer had plenty of gas left in the tank and dug in to notch a half-length score over the hard-charging Eagle (Candy Ride {Arg}). Majestic Harbor (Rockport Harbor) was third. Heavily favored Effinex (Mineshaft) never got involved and finished off the board.

To win a Grade I with him is phenomenal, trainer Eddie Kenneally said. Now he has established himself. He is a beautiful horse, so now he’s got credentials to be a stallion hopefully at some point in his career here in Kentucky and I think he’s earned that right. He’s been a durable and hard-knocking horse and it’s great to finally win a Grade I. He was coming into the race great so we decided to take a shot. For a 6-year-old, he’s relatively light and has been lightly raced and he’s a horse that runs well fresh so we gave him the winter off after the Breeders’Cup. He came back with a huge run at Monmouth a month ago [in the Majestic Light S. May 21].

Bradester, winless in two prior attempts at the Stephen Foster distance of 1 1/8 miles, won the GIII Salvator Mile and GII Monmouth Cup at Monmouth back-to-back last summer. He closed out the year with a runner-up finish in the GIII Philip H. Iselin S. Aug. 30 and a tiring ninth-place finish in the GI Breeders’ Cup Dirt Mile at Keeneland Oct. 30. The 2014 GIII Ack Ack H. hero returned to action winning the Majestic Light S. in front-running fashion back at the Jersey Shore May 21.

This race came up with a shorter field than in past years, so we figured it was a good opportunity for him to take a shot at some Grade I horses, Kenneally continued. Looking at the form, he is the true speed of the race. [Jockey] Joe [Bravo] rode him with so much confidence and we are just so delighted for the whole team. We have a great crew and we couldn’t have done any of this without them.

Bravo added, He’s a pretty fun horse, he does all the hard work for you. He kind of reminds me of his father Lion Heart who I rode in the Haskell. I just kind of rode him like his dad and you saw what he did today.

Winning owner Joseph W. Sutton is the founder and CEO of Sutton Ventures Group headquartered in Houston, Texas. SVG, through its many affiliates, is actively involved in many energy-related businesses