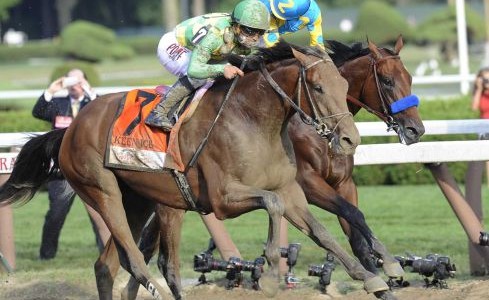 Before the running of the $1.6 million Travers Stakes (gr. I) at Saratoga Race Course, trainer Dale Romans thanked the New York Racing Association for capping attendance at 50,000 people—so more, he said, would not be there to boo Keen Ice after the Curlin colt took down Triple Crown champion American Pharoah.

A 16-1 shot who had not won for Donegal Racing since breaking his maiden last September, Keen Ice was on an eight-race losing streak while American Pharoah had not lost during the span. But the maiden winner had been creeping closer and closer to the champ. He ran third behind him in the Belmont Stakes (gr. I) and second last time out in the Aug. 2 William Hill Haskell Invitational (gr. I) after a seventh in the Kentucky Derby Presented by Yum! Brands (gr. I). And when American Pharoah tried to take the 1 1/4-mile Travers on the front end with pressure from Frosted all the way, it was Keen Ice who moved up from a stalking third to fulfill his trainer’s prophetic words with a furious late charge. Watch Video

American Pharoah was off to a perfect start from post 2 as the 1-5 favorite for Hall of Fame trainer Bob Baffert, and picked up his usual place at the front of a field of 10. Zayat Stables’ brilliant son of Pioneerof the Nile clicked off opening fractions of :24.28 and :48.30 with Frosted hounding his outside flank, while Keen Ice was content to settle fifth under jockey Javier Castellano, behind Upstart and Smart Transition.

But jockey Victor Espinoza felt something was lacking as the Triple Crown winner hit the half-mile pole.

“Maybe it was just a little too much for him those three weeks, flying back and forth,” Espinoza said of the colt’s journey from California to New Jersey for the Haskell, then back to the West Coast and onward to Saratoga again. “He was running pretty comfortable there, but not like he used to. By the half-mile pole I knew I was in trouble.”

Speeding through three-quarters in 1:11.48, American Pharoah fought hard on the inside to turn back Frosted’s tenacious run as the field headed for home. But just when his rival faded from the challenge, Keen Ice surged forward in the final strides to beat him by three-quarters of a length.

“I followed those two horses, and I just kept tracking and following with them,” said Castellano, who became the winningest Travers rider in history with his fifth victory. “At some point, when turning for home, I saw the horses slow down and start coming back to me, so I knew that I had a chance to win the race. I expected this kind of effort from him today, after I worked him the one time last week. We were a good fit and I thought I had a real good chance to win the race. My horse ran a hard race and to beat American Pharoah, that’s a good race.”

Frosted held for third, while Upstart was fourth and Texas Red ran fifth behind a final time of 2:01.57 on a fast track. In comparison, the Kentucky Derby won by American Pharoah was run in 2:03.02 at the same distance.

“You never know how the horse is feeling until you run him. He travelled and he shipped well, but I could tell by Victor’s body language that he was done at the half-mile pole and he kept trying,” Baffert said. “That’s the only reason he ran second, it’s because he’s such a great horse—but the winner ran a really great race.”

Immediately after the race American Pharoah’s owner, Ahmed Zayat, said that his “gut feeling” was to retire the colt from racing.

“So my gut’s saying, if the horse showed me that he tailed off, he’s not the Pharaoh I know, then there’s no question in my mind that the right thing is to retire him,” Zayat said.

Asked if American Pharoah would race again following his first loss since running fifth in his debut last August, Baffert was non-committal. American Pharoah was supposed to have run in the Oct. 31 Breeders’ Cup Classic (gr. I) at Keeneland. He will begin a stallion career at Ashford Stud near Lexington when his racing days are done.

“I don’t know. I wanted to see how taxing this race was on him,” Baffert said. “This is something we have to sit and figure out. I’m not really used to being in the position with him, so it’s sort of hard to digest right now.”

Trainer Dale Romans, on the other hand, was digesting his upset victory quite well.

“We were watching the race in the office and I think sprinting over (to the winner’s circle) is the first time I’ve run in a long time,” he said. “(Owner) Jerry Crawford called me this morning and said, ‘Let’s put him in the race. We don’t need to run second again in a grade I. Let’s try to win.’ We put him in the race and Javier rode him perfect. He was never far out of it, and turning for home, you could almost tell he was going to win.”

Keen Ice was bred in Kentucky by Glencrest Farm out of the Awesome Again mare Medomak and now has earnings of $1,490,395 from 10 starts with exactly two wins—that maiden score and the grade I Travers over Triple Crown winner American Pharoah.