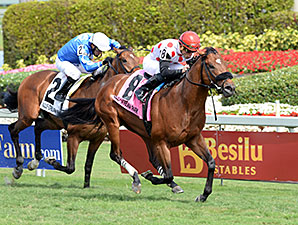 Live Oak Plantation’s Souper Colossal, a sharp second in the West Virginia Derby (gr. II) in his last start, will attempt to capture his first graded stakes in the Aug. 29 Smarty Jones Stakes (gr. III) for 3-year-olds at Parx Racing.

The Saturday program kicks off the new racing festival at Parx, which has beefed up purses for roughly six weeks and added several stakes. Purses for 11 races Aug. 29 total a tad more than $1 million.

Souper Colossal, trained by Edward Plesa Jr. and to be ridden by Paco Lopez at 124 pounds from post 1 in a field of eight, rated nicely just off the pace in the 1 1/8-mile West Virginia Derby Aug. 2. He grabbed a short lead in the final sixteenth of a mile but couldn’t contain Madefromlucky, who is expected to next race in the Travers Stakes (gr. I) at Saratoga Race Course Aug. 29.

Souper Colossal, a War Front colt, has four wins and three seconds in eight starts; his only off-the-board finish came in last year’s Sentient Jet Breeders’ Cup Juvenile (gr. I). Plesa has said he believes the colt can be a force going long, and his last two efforts would suggest that’s the case.

Shortleaf Stables’ Tekton, who scratched from the West Virginia Derby and Jim Dandy Stakes (gr. II) to race in the un-graded Curlin Stakes the day before, drew post 6 and will carry 117 pounds under top local rider Frankie Pennington. Tekton dueled early in the 1 1/8-mile Curlin only to finish second, 4 3/4 lengths behind Smart Transition, who also is expected for the Travers.

Anthony Dutrow trains the son of Bernardini who is seeking his first stakes victory.

The well-traveled Divining Rod, owned by Lael Stable and trained by Arnaud Delacour, drew post 7 at 124 pounds under Alex Cintron. The Tapit colt has the most graded stakes experience with a victory in the Coolmore Lexington (gr. III) and third-place finishes in the Xpressbet.com Preakness Stakes (gr. I), Tampa Bay Derby (gr. II), and Indiana Derby (gr. II) this year.

Divining Rod also finished a very close third in the Ohio Derby, which carried no grade this year but drew a legitimate field; he finished behind Mr. Z and the since-injured Tencendur.