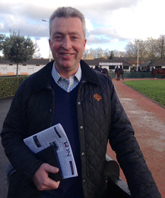 Americans have a reputation–and well deserved–of being somewhat provincial. We like what we know, and we’re not a particularly adventuresome lot. In promoting the Arqana sales to American interests, Tony Lacy’s job is to fight that complacency by making Americans feel right at home at Deauville. It must be working, because they were out in force at this sale, including several first-timers. The TDN’s Sue Finley sat down in the restaurant overlooking the Arqana sales ring with Lacy and his wife, Kathy, a graphic designer, to talk about how he helps Americans to overcome the language barrier, the fear of the unknown, and the dreadful lack of large cups of coffee in Deauville.

An Irish native who left his home country when he was 25, the now 46-year-old Lacy is a bloodstock agent in his own right in America, as a part of Four Star Sales, and through his own business, Lacy Bloodstock, and recently conducted the transaction to send Pleasantly Perfect to Turkey.

TDN: What exactly is your role with Arqana?

TL: My job is to be the face and the contact for somebody in the U.S. who has a question; to promote the sale, promote the different catalogues issued for each sale, distribute those catalogs and basically help anybody who might have an interest or have an inquiry. The language barrier at first was one of the biggest hurdles for some people, or they felt it was. But when you come over here, you learn most people speak English. So breaking down those barriers, making them feel if they make the trip, it’s going to be problem-free, stress-free and trying to create an infrastructure of logistics, or hotel arrangements and introducing them to the right people. On everybody’s first trip, I have to help them quite a bit, but on their next trip, they feel like they’re comfortable enough to do it on their own.

TDN: With the Charles de Gaulle airport on the far side of Paris from Deauville, it means you have to get around or through the city on the way here. I’d imagine that’s a mental hurdle for some people.

TL: It’s funny, but most people, even very seasoned travelers are a little intimidated by driving through Paris or getting on a train in a country where they don’t speak the language. So I always rent a car myself and tell people what flight I’m on and they generally book the same flight, and I drive them on up. I’ve done that with many people, from Ben McElroy to Donato Lanni. You just get them up here, introduce them to people, and then they find the world is very small, and that they generally know a lot of people here already. All of a sudden, they’re invited out to dinner, or I bring them out to dinner and it becomes a fun place for them to come. People are a little intimidated, but it’s a learning process. Some people come over and get business done right away, and some people just want to come over and see it. But getting from Charles de Gaulle to Deauville, and the different ways to come, whether it’s by train or by car, renting a car or by taxi, it’s not that bad.

TL: At the beginning, I think there was a push to have people come over, buy yearlings and keep them in training in France. But you’re selling two different concepts–buying horses in Europe, and having a horse in training in France. Those are two difficult concepts to sell at once. Sometimes they buy one and think, `oh, that one would fit here.’ But the December breeding stock sale was the first one to take off with traffic. People found they could come over, buy a mare and bring it back without any complications. So whether it had some relevance in the U.S., or was a European pedigree that they wanted to try in the U.S., it worked for them. With yearlings, it’s more of a longer-term process.

TDN: How long have you been doing this job?

TL: I started in 2009, and it was during the downturn. People were trying to look after their home business rather than trying to expand. They were circling the wagons. In 2010, the traffic was pretty light. There weren’t too many people willing or able to come over and buy horses, or even look at the option. But from 2011 onwards, it has gained momentum. People have been inquisitive; SF Bloodstock is very strong here, obviously. Bill McAlpin from Greenwood Lodge has mares over here, John and Tanya Gunther have horses. There’s now a resurgence of North American activity in France, and in Europe in general. France is a benefactor of the awareness that Americans need to broaden the gene pool a little bit again, because our American sales over the last 20, 30, 40 years were driven primarily by Europeans and foreigners coming for Keeneland July, September and the November sales. We’ve sold our commercial bloodlines, and they need to rebuild those bases now. Steve Young came here last year. Steve is probably a person I wouldn’t put on the top of my list as somebody who would come to France. But he really enjoyed it. He tried it, had a good experience and wanted to come back. You’re starting to see people who are generally dirt buyers. WinStar were interested in coming this year, so you’re getting a real shift in the awareness of European pedigrees and European sales. Deauville is a destination as well as a sale. It’s like Saratoga or Del Mar. If a principle wants to come and have fun, buy nice horses and enjoy themselves, Deauville is a perfect spot for them. It’s the Saratoga of Europe.

TDN: You now charter a flight directly from Tattersalls on the Thursday before this sale.

TL: The flight from Stanstead has been going on for a number of years, but a lot more Americans are taking it now. They’re aware of it. They have to be at Tattersalls, and most people are planning to come to Deauville anyway and they want to get on the flight because it’s convenient. I’m actually pleasantly surprised, though, because a lot of people are coming directly to Deauville.

TDN: We saw a lot of people who are starting to become regulars here at Arqana; the Seitz family, Justin Casse, Chad Schumer, Wesley Ward, but also some first-timers, like Dave Reid and Frank Antonacci. Who are some of the other Americans who made the trip this week?

TL: Shawn Dugan was here. Tom Ryan, and Ben McElroy, who are based in America. Price Bell was here for the first time for this sale. I know he really enjoyed himself. He didn’t get what he was looking for, but he had a great time.

We’ve made a real push to get some of the older, established agents over, but I’ve pushed to get it to the younger agents because it’s fun, and they can expand their client base, expand their connections, and it’s good for their portfolio. Alex Solis came over two Decembers ago, bought a half-sister to Goldikova and he’s delighted with the mare and everything has worked out fantastically and now the progeny is coming over here to France to be put in training here. A lot of the more powerful consignors now are young, whether it’s Henri (Bozo) or Etienne and Anna (Drion).

Lacy is interrupted by a waiter delivering a thimbleful-sized cup of coffee. He laughs.

TL: That’s the venti. But that’s the charm of coming to France for the first time–it’s a totally different culture, and that’s what’s so great. I think America has been sort of insular–maybe not by choice, but economically, recently, it might have been forced on them. And now the world has moved on quickly, and America needs to move with it or we’re going to be isolated. And that’s something that some of the younger agents are acutely aware of.

TDN: What’s your best sales tool to get people here?

TL: My belief is that you make them aware of the sale. You can’t make somebody come to a sale. You’ve just got to present it as an option. That, I think, is the strategy for Arqana in general. It’s a welcoming sale. If it’s not in their business plan, it’s not an option unless they just want to have a good time. I make sure that everybody is aware of each sale, that they get a catalogue. Working with FourStar, I’m at the barn every day at Saratoga, so I get to meet a lot of people and make them aware the August sale is coming up. `Do they need a catalogue? Would they be interested? Do they need help with logistics and transport planning? There are some nice horses, etc.’ By offering my assistance, I’m making them aware of it. People become inquisitive after a while if you keep repeating it a few times. It’s branding, it’s the repetitive mentioning of the sale to people and again, welcoming, inviting them to come, making it as easy and as pain-free as possible and hoping they’ll respond. Franco-American relations over the years have been very strong, the history between Johnny Jones and Alec Head, Alleged and Nureyev. It’s a tradition we’d like to continue.

TDN: Do you have a final sales pitch for the circumspect?

TL: Come for the sales. It’s only a couple of days, and then enjoy the place. Go down to the D Day landing beaches, Omaha Beach, the American Cemetery, Pointe du Hoc, Mont St. Michel. It’s fascinating how much is available to do in this area. Drive through the Loire Valley. It’s some amazing stuff.