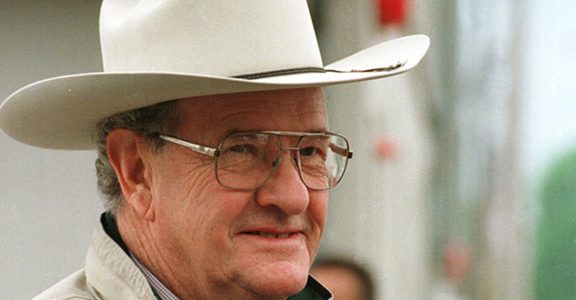 TDN: Stay in the Buggy: A Remembrance of Johnny Jones

It’s been more than 10 years since I’ve been inside the main office at Walmac, but when I close my eyes and think about it, I can place myself in John T.L. “Big Johnny” Jones Jr.’s office as vividly as if I were standing there right now.

His door at the end of the hallway was nearly always open, as was Johnny. You’d smell the cigar before you saw him (but you already knew he was in the office because you could hear him clear across the other end of the building calling out for one of us to go in and see him). His desk was off to the side, so you’d have to poke your head around the end of the corridor before he saw you were there, unless he was expecting you because you’d received one of his “Gotta minute?” phone calls when the shouting didn’t work. The first thing that came into view straight ahead were a pair of Christine Picavet paintings of two of the champions and leading sires Johnny had syndicated and stood at Walmac, Nureyev on the left and Alleged on the right, hanging above his fireplace which, even if it wasn’t lit, seemed to fill the room with warmth. Or maybe it was Johnny who exuded the warmth.