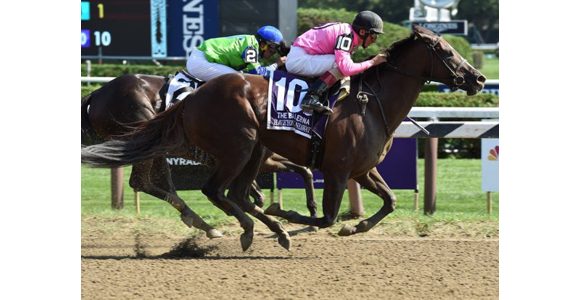 Since moving to New York and to the barn of Thomas Morley, Haveyougoneaway has been a different mare and she took another step forward Aug. 27 with a hard-earned victory in the $500,000 Ballerina (gr. I) at Saratoga Race Course. Watch Video

The 5-year-old daughter of Congrats made a simultaneous move in the turn with fellow longshot By the Moon and just outfinished her rival to win by a half-length after the pair passed tiring favorite Carina Mia in the final furlong.

With jockey John Velazquez aboard for the first time, Gary Barber and Sequel Racing’s Haveyougoneaway finished off the seven furlongs in 1:21.63 for her third straight victory, following scores in the Dancin Renee July 3 and the Honorable Miss (gr. II) July 27.

The Ballerina is her first grade I victory and also the first top-level win for Morley.

The pace was set by Paulassilverlining and Carina Mia, who dueled to fractions of :23.39 and :45.54 through a half-mile as the top two finishers stalked. Carina Mia took command in the turn, but lugged out in the stretch, forcing By the Moon to duck slightly inside, while Haveyougoneaway stayed in the clear outside.

“Perfect trip,” Velazquez said. “She broke well and got in good position. I was just trying to follow Joel Rosario (on Carina Mia). Then, all of a sudden, he took off at the half-mile pole and I sat there and decided to wait. I didn’t want to make a premature move. When I asked at the quarter pole, she responded right away.”

“She ran a winning race today,” said Michelle Nevin, who trains By the Moon. “I’m very happy with her. It was a big effort. She fits in well with these (grade I) horses.”

Bred in New York by Andy Beadnell and Susan Beadnell, out of the Wiseman’s Ferry mare One Wise Cowgirl, Haveyougoneaway has an 11-4-6 record from 26 starts and $897,425 in earnings.

“Now obviously we’ll have to plot our route to California carefully,” Morley said. “She’s run three times in pretty quick succession. She ran at the back end of Belmont and won a (stakes), came up here and won opening week, and then came back and won the Ballerina in just under four weeks. She’s had three big efforts in relatively quick succession, so we might just train up to the Breeders’ Cup.”