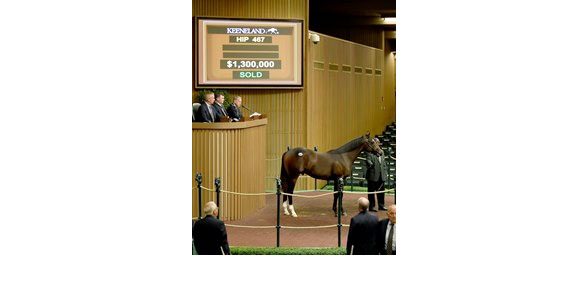 A War Front colt produced from the two-time grade I-winning A.P. Indy mare Love and Pride became the second seven-figure yearling Sept. 13 at the Keeneland September yearling sale when he was purchased by Shadwell Estate Co. for $1.3 million.

Consigned as Hip 467 by Four Star Sales, he is from the extended female family of grade I winner Cara Rafaela, the dam of champion and leading sire Bernardini .

“The pedigree speaks for itself, it’s a great pedigree, and he was a great, cool horse,” said Four Star Sales’ Kerry Cauthen. “He was a late foal, and had so much upside in him, he was just a great individual and he acted like one. He was a good horse.”

Cauthen said he believed the colt would do well, but did not want to pre-judge the market.

“This is not a market where you want to be overly confident at any point,” he said. “We thought the horse was worth all of that and more, maybe, but I think that was a very fair price for both sides. You never expect it, but you’re always glad and appreciative.”

The colt was bred in Kentucky by Three Chimneys.

“This horse I’ve watched now for three months and he was in my consignment since June,” Cauthen said. “We’ve got a very professional team, we all work together, and we’re all trying to think of how can we get this horse to his best, and sometimes you get lucky.”

Erin Shea contributed to this article.