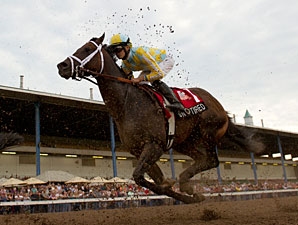 Reprinted from the Bloodhorse.

Uncaptured showed why he was the 2012 Canadian Horse of the Year as he rallied from off the pace to win the $500,000 (Canadian funds) Prince of Wales Stakes, the second leg of the Canadian triple crown, at Fort Erie in Ontario July 30 (VIDEO).

Sent off the heavy favorite in the six-horse field of 3-year-olds bred in Canada, Uncaptured was unhurried early in the 1 3/16-mile Prince of Wales under Miguel Mena, sitting in fifth position four lengths off the pace set by Power Phil, who took the field through fractions of :24.15, :49.42, and 1:13.51.

With a half-mile to run Mena moved outside horses on the final turn, going five-wide to grind out the victory by one length over River Seven, who had inherited the lead turning for home. Uncaptured completed the course in 1:55.49. Niigon’s Glory finished a distant third, ahead of Jagger M, Power Phil, and Rackman. All starters carried 126 pounds. Dynamic Sky and Spring in the Air were scratched.

Uncaptured, also the champion 2-year-old male in Canada last year, won three stakes at Woodbine in 2012 and visited the winner’s circle in six of his seven starts a year ago, including after the Kentucky Jockey Club Stakes (gr. II) and the Iroquois Stakes (gr. III) at Churchill Downs. The Prince of Wales ended a frustrating start to this season, as Uncaptured finished second in three of his first four starts, including a head loss to Code West in the Matt Winn Stakes (gr. III).