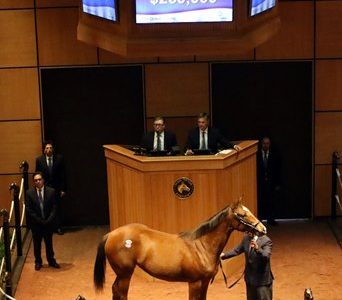 Demand for yearlings sired by red-hot Spendthrift stallion Into Mischief continued to be strong during the Oct. 26 session of the Fasig-Tipton October yearling sale, with a filly sold for $260,000.

Consigned as Hip 1299 by Four Star Sales, the filly was purchased by Tracy Farmer, with trainer Mark Casse signing the ticket, providing a Glencrest partnership with a healthy return on the $95,000 paid for the then-just-turned yearling at this year’s Keeneland January mixed sale.

Bred in Kentucky by John Kerber and Iveta Kerber, the filly is out of the A.P. Indy mare Limbo and is a half sister to multiple stakes winner Gentleman Chester and stakes winner Back Forty. The filly’s second dam is two-time champion Northernette, a full sister to leading sire Storm Bird.

Sent to the Fasig-Tipton Kentucky July yearling sale, the filly was bought back on a final bid of $165,000 and Thursday’s sale showed she had improved in the interim.

“That was probably the wrong spot for her,” said Glencrest’s John Greathouse of the July sale. “She got better. The three months really helped her. I thought the world of her. She was a big two-turn looking filly for an Into Mischief. Being out of an A.P. Indy mare you would have to think she could stretch out a little bit.”

Greathouse said the filly was the second foal he had purchased by Into Mischief, a stallion on which he is bullish.

“I think he is the next Tapit ,” the horseman said of Into Mischief, who also had a colt sell for $400,000 during the sale’s final session. “He improves mares right and left. He’s proven that time and time and again, and I think he’s going to continue to do so. It’s a question of whether you can get them to stretch out two turns. I think he is a hell of a sire and a really good horse.”